The biggest planning issue facing the entire southeast is the recent White Paper, “Planning for the Future”. The new proposals, following a decade of overdevelopment, would grant developers even further license to escape local control. It is notable that these proposals have drawn condemnation from across the political spectrum, including the parliamentary Conservative party.

We would point out three areas in which the proposals are fundamentally flawed:

2) They would establish a centralised algorithm to impose higher housing targets on local authorities. This would be a best a very blunt instrument that would be blind to local geography, ecology and building patterns.

A consultation period on these proposals has now ended. Media reports indicate that the government may alter its position at least partially.

We encourage all residents who have not already done so to contact our MP Mims Davies (mims.davies.mp@parliament.uk) to make their views clear and to request her support. The Society’s open letter to Ms Davies is available for reference on our home PAGE, on the Latest News button.

The Lindfield Preservation Society has been asked to circulate the petition below expressing concern about the potential loss to development of open land in Haywards Heath. The area is outside the Society’s mandate, but all local overdevelopment collectively corrodes the character and quality of life in our area. Moreover, unrealistic housing targets imposed by central government will continue to put pressure on Mid Sussex District Council to offer up unsuitable sites. Members may therefore be interested in this petition and may wish to sign in a personal capacity.

Works have now begun on a site with a history of flooding and land instability. Mid Sussex District Council appears to have satisfied itself that the developers have responded adequately to the risks. Concerns have remained, however, and the weekend of 14 – 15 November saw unprecedented flooding in this area. Residents have called on the Council to issue a stop order halting construction until an independent, expert analysis can find a permanent solution.

Fairfax the developers withdrew their application for 725 homes earlier this year. This is likely to be a tactical withdrawal only, given the potential profits from a scheme of this size. We can expect the developers to continue their efforts to have the golf course added to the District Council’s list of approved sites for development. Vigilance will be required.

Southern Housing Group announced in June its intention to build 200 dwellings south of Scamps Hill and subsequently submitted a detailed (“reserved matters”) planning application. Regrettably, the Secretary of State gave outline planning permission to Wates in 2018, so development in some form will take place. There is some irony in a charitable housing trust carrying out this unwarranted assault on our community. The Society has objected, although we are limited now to commenting on the details of the scheme.

We encourage residents to object to the case officer (Steve.Ashdown@midsussex.gov.uk) before 3 December 2020, the determination deadline. Our submission is attached for reference.

There was a victory for common sense in August when a Planning Committee refused permission for this scheme. The proposal, comprising 34 flats and four “town houses”, was an urban concept entirely out of keeping with the rest of Lindfield’s built environment. An appeal is of course possible. IN MARCH 2021 AN APPEAL WAS LODGED. THE SOCIETY’S ORIGINAL FULL OBJECTIONS WILL BE TAKEN INTO ACCOUNT. HOWEVER, OUR CHAIRMAN HAS SUBMITTED A FURTHER REPRESENTATION TO EMPHASISE THE STRENGTH OF LOCAL FEELING AGAINST THIS PROPOSAL. His letter can be read below: 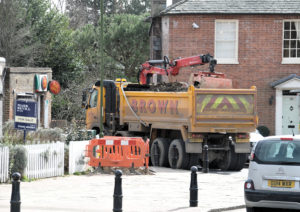 January 2021 Update: WSCC Highways dept is now prepared to consider a further application to RESTRICT HGV traffic between the High Street and Gravelye Lane to PREVENT HGVs using the narrow Lewes Road/High Street junction. An independent professional consultation will analyse the SUPPORT FOR and the objections AGAINST the Traffic Restriction Order. As soon as coronavirus restrictions start to ease the Parish Council and Project Centre will launch a dedicated website for the consultation. Look out for the launch of the Consultation and PLEASE contribute, as overwhelming support from the community is essential if WSCC is to reconsider their decision. Read more in the recent Lindfield Life February edition, page 17.

West Sussex County Council Highways department continues to resist an HGV ban (except for access) from Lewes Road between Gravelye Lane and the High Street. This seems to us to be an entirely sensible proposal that would largely remove the temptation for hauliers to use Lindfield as a short cut to and from sites farther east. We, the Parish Council and other concerned residents will continue to lobby for this measure.

West Sussex County Council is currently conducting a survey on transport planning (until 17 December 2020) at www.westsussex.gov.uk/WSTPsurvey. You can support our efforts by completing the survey and stressing the need for an HGV exclusion.