MEMBERS OF THE MANAGEMENT COMMITTEE

HISTORY OF THE SOCIETY

In May 1961 developers sought permission to build five tower blocks containing 200 flats on the Welkin site.The reaction in Lindfield was immediate and intense. The Welkin occupied several acres of land at the top of the ridge on which the All Saints’ Church stands,at the highest point in the village. A former vicar had built a large vicarage on the site which later became a a private house and still later a boys’ preparatory school, until it was placed on the market as a site suitable for development.

About thirty people met in the garden of Seckhams, then owned by Mrs Williams. Brigadier Johnny Parsons took the chair. It was agreed to oppose the project in the most forthright manner, and that this and any later similar proposals could be best dealt with if an organisation was set up with this purpose as its aim. Thus was born the idea of a society for the preservation of Lindfield.

Time was pressing as the Council only gave three weeks for protests, so a public meeting was arranged at the Congregational Church Hall on the following Thursday, and a petition to the local authority was started. Among those most active were Geoffrey Filmer and his daughter Caroline, Tony and Pam Blake, Sydney Brown, Johnny Parsons, John Bailey, Miss Millett and the Misses Chambers. It was a wonderful example of what can be done by a dedicated few in a very short time. 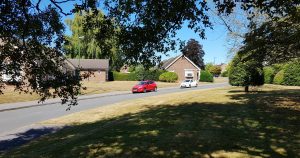 The meeting was packed and overflowed into the street. There was one very vocal dissident who was in favour of the flats but the result of the voting was in favour of forming a society to fight the proposal, with only the one vote against. The first committee had Johnny Parsons in the chair and Pam Blake as honorary secretary. They organised a petition with a total of 600 signatures, and raised funds to defray expenses and meet professional fees in any fight which might ensue.

Early in the life of the Society its objects were clarified and rules drawn up, and this led to its being registered as a charity. In the ensuing years the Society was engaged in numerous planning matters, always trying to maintain the environment in which we live. It has never been the aim of the Society to prevent development but to ensure, so far as is possible, that any development will preserve and enhance the character of the village and not conflict with the surroundings.

In the early days it had been the aim to preserve Lindfield’s detachment from Haywards Heath, but unfortunately this objective was lost. An application for the development of open land by West Common was fought through by the Society to an enquiry, but the Ministry Inspector granted the application. Immediately several owners of the remainder of the land put in similar applications, which in view of the case just lost could not be refused by the Council.

Hickmans Lane Meadows, as they were called, were owned by Miss Savill who had done a very great deal for Lindfield during her long residence in the village. It was she who paid to have the main electricity supply cables buried down the High Street to avoid the unsightly overhead network. When she died, she had for years been too ill to make a will, although she had earlier intimated verbally that it was her wish that Hickmans Lane Meadows should be preserved as an open space for the benefit of the villagers. On her death the executors had no option but to dispose of the estate to the best advantage, and sought planning permission for houses over the whole site.

In 1968 the Society obtained registration of the common and pond as common land, in spite of opposition from the local council. Then the County Council consulted the Society regarding making the centre of the village a conservation area . The Society persuaded the council to include the common and other environs which were not originally included, and in 1969 the declaration was made.

The Society still remains vigilant on all planning applications and has prevented many developments which would not have been in keeping with the environment.